How to make the perfect no-churn ice-cream – recipe

Ilove ice-cream more than almost anything else in the world – but I’ll be honest, I don’t love making it. All that faffing about with egg custards, the swearing and bashed elbows as you dig around for the dusty ice-cream maker at the back of the shed, if you even own such a thing in the first place – all things considered, it’s a lot easier to pop to the shops and shell out for some professional stuff.

But, however good the selection in your local supermarket, you’ll be hard pushed to find any flavour more interesting than 25 variations on chocolate, which is where no churn ice-cream comes in. Yes, it’s inevitably a slight compromise, because churning whips air into the mixture, giving the finished product a certain lightness, but do it right, and the results can be surprisingly good, and certainly worth the very minimal effort involved. And once you’ve mastered it, a world of flavour is your oyster. (NB: that isn’t a suggestion; I had oyster ice-cream once on the Ile de Ré and it was disgusting).

Eggs are divisive in ice-cream generally; neither kulfi nor Philadelphia-style ice-cream require them, and gelato tends to contain less than the kind of ice-cream traditionally made in this country. They’re not often used in no-churn ice-cream, probably because they suggest a more complex method than most people are looking for here, but Mary Berry, pastry chef Stella Parks and New York Times columnist Melissa Clark all stick them in anyway, albeit in very different forms.

Berry’s recipe is the simplest, involving beating the egg whites to stiff peaks, then folding them, along with the yolks, into whipped cream for a light, but fairly muted result that might work better with a more strident flavour than vanilla.

Clark’s version starts, like a classic ice-cream, with an egg yolk and cream custard, whipped and cooled before freezing, while Parks whips the eggs themselves, heated to 70C in a bain marie for maximum aeration: “Not meringue (egg whites and sugar would be too lean and too fluffy for ice-cream),” she explains, “and not pâte a bombe (whipped egg yolks and sugar would be too dense and rich), but whole eggs.” Both of their recipes are delicious, but very rich indeed: the kind of thing even I could only eat a modest portion of, and they’re also pretty labour intensive, which is not what I’m looking for in this instance. If you’re after a no-churn ice-cream to wow your guests, then these are the badgers. If you’re just looking for something to knock up to eat straight from the tub on a hot day, however, then they might be surplus to requirements.

In fact, I don’t think eggs are necessary at all; they’re too rich for my purposes. Both Martha Stewart and BBC Good Food make very decent ice-cream without, but using condensed milk, which, thanks to its relatively low water content, also has the benefit of giving the finished product a smooth, almost velvety consistency. Interestingly Clark reckons cream cheese is the key to “a silky texture without the ice crystals that plague other no-churn ice-cream recipes” which “helps hold the custard’s emulsification even during freezing”. Her ice-cream does have a superb silkiness, but it’s not significantly superior texture-wise, in our opinion, to the better condensed milk versions. 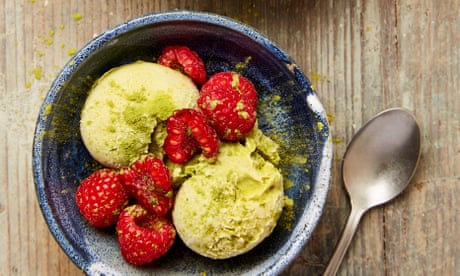 The problem is, however, as Parks observes, condensed milk has a very particular “cooked, milky… canned dairy flavour” which always reminds me, not unpleasantly, of white chocolate. Use too much of it, and your ice-cream will be queasily sweet, as we think Stewart’s is. “Almost inedible” according to my ice-cream guinea pig, though I manage to put away a few more spoonfuls in the interests of giving it a fair trial.

BBC Good Food’s is far more subtle (“I’d eat the whole thing and I wouldn’t even feel guilty because it’s not particularly sweet” says the pig, doing just that), because it uses a much higher ratio of cream to condensed milk, but this also means it sets more solid. I’m keen on the fact that these recipes are so quick and easy – who doesn’t love a recipe where you just beat everything together and shove it in the freezer for a few hours? – but I do think it should be scoopable, rather than dense and chewy, which I think means adjusting the ratios slightly to achieve a happy medium.

Stewart’s recipe recommends adding a slug of booze to the mixture to “help keep the ice-cream soft” as Sarah Carey, who demonstrates it on Stewart’s website, says – which it does, thanks to its very low freezing temperature. It doesn’t really matter what you use, as you won’t be able to taste it in the finished product, but rum or whisky are good bets.

If you don’t like condensed milk, you may wish to consider using a mixture of ordinary sugar and a liquid sugar like golden syrup to make the mixture more elastic, as Jeni Britton Bauer of Jeni’s Splendid ice-creams puts it to Clark. Clark herself uses honey, on the basis that “not only does it improve the texture of the ice-cream, but it also adds its inimitable caramelised sweetness to the mix, turning plain vanilla into something much more aromatic and lush.” She’s right, honey is infinitely more interesting than white sugar, and gives a gorgeous result, though it’s quite unnecessary with the condensed milk I’m using, unless you have a really sweet tooth.

I’ve used that most classic of flavours, vanilla in the recipe below, but you could substitute other essences, or indeed play around with citrus zest or other spices if you prefer, or even fold in some fruit. Don’t omit the salt unless you’re really trying to cut down though; it gives a more rounded flavour. 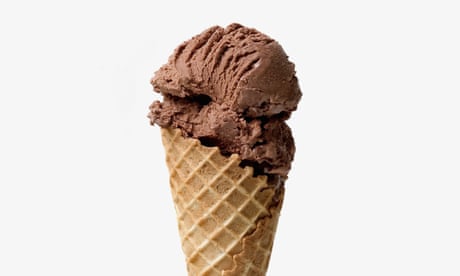 While most recipes simply call for the ice-cream to be frozen in a suitably sized container, Clark prefers to freeze it in ice cube trays on the basis that it solidifies faster, and can then be whizzed up more easily in a food processor with a dash of milk to create something the consistency of “soft serve” (which I think we’d call Mr Whippy in the UK). Frankly, this is a massive pain: it’s hard to pop the ice-cream out of the trays, even using flexible silicone ones, my fingers get really cold, and the ice-cream very soft indeed in the process, which means I have to refreeze it afterwards. The texture is great, but for me, it’s not worth the hassle. A loaf tin, if you have one, is a better container, but any storage box will do. Note this does take a good few hours to freeze – in fact, the waiting is the hardest part of this recipe.

Whisk together the condensed milk, alcohol, vanilla and salt until well combined.

In a separate bowl, beat the cream to stiff peaks, then beat in the condensed milk mixture until thoroughly combined.

Spoon into a freezable container (a loaf tin does nicely), cover and freeze until solid – this will depend on your freezer, but six to eight hours is a good bet.