My search for the perfect salad

Simple, wholesome leaves or a brass band made of food? These days a salad can mean almost anything – except dieting

I had a conversation once with the very urbane chef and pioneer of the contemporary British scene, Rowley Leigh. He didn’t understand salads, he said, now that people had started putting things like meat in them. I disagreed: it is wonderful to find meat in a salad, a windfall, a gift from the universe, like putting your winter coat on for the first time that season and finding a tenner.

Anyway, I only name-drop because salad is quite an interesting waypoint in the evolution of cuisine: there is a purist old guard who can innovate like crazy within a dish, but likes to maintain categories as they have always been – salads with the emphasis on “side”, centrepiece dishes rather than small plates. And then there is a modern wave, which likes to throw everything into the same dish, so anything can be a salad, so long as it’s not hot. And even if it is, they will sometimes call it a “warm salad”. I can see the merit in both sides, but am going to come down on the second.

I don’t want to linger on the meat salad because, long term, it is my sworn intent to stop eating meat. But just in the meantime, the all-time best, all-year-round, are: the duck salad in the Ivy, for which I will waive my no-fruit-in-a-savoury-thing salad rule; a roast chicken, flat leaf parsley and lemon salad, for which you slice lemons vertically, like mandarin segments, and (there is something incredibly chic about this, but I cannot tell you what); a bacon and egg salad with asparagus, garlic chives and pea shoots, by the current king of salads, the American cook Joshua McFadden; and the Vietnamese chicken and cabbage salad, for which Andrea Nguyen has a stunning recipe (this doubles as the best low-calorie, low-carb, low-fat, low-everything-except-salt salad).

Salads have historically been associated with self-denial, which is not quite right – you can joylessly squeeze a lime over some leaves, but that’s not really a salad, that’s more of a garnish of self-hate. A properly dressed salad is no more abstemious than anything else. But millennial salad-entrepreneurs – I’m talking about McFadden again, really – have beefed them up (not with beef!), and the broad trend now is for a salad to be more like an actual meal. He divides the year into six seasons rather than four (the adds are early summer and late summer; the others remain the same) and typically builds a salad around a core vegetable. He then chucks so much ancillary protein and flavour at it that it’s like a brass band made of food: celery, sausage, provolone, olives and pickled pepper salad; raw corn with walnuts, mint and chillis; raw brussels sprouts with anchovy, lemon and pecorino (he does other things beside salad; it’s just the salads that I happen to love).

If you’re prepared to discard rawness from your salad criteria, you open up to the world of the blanched or roasted vegetable. Green beans are peculiarly versatile, and peppers are very attractive, but I like that mystery of the vegetable that is a bit boring when hot and becomes exponentially more delicious as it cools down; the cherry tomato, the butternut squash, the charred courgette.

The ultimate salad cheese is feta, not parmesan; parmesan works with everything, whereas feta is like an awkward adolescent that keeps falling out with everyone, until it finally finds a youth club (cucumbers) where it can really be itself. I don’t think I’ve ever had a caper and thought “they shouldn’t have put this caper in”, nor an olive, nor any flat leaf parsley. Conversely, if anyone puts a nasturtium, or a peach, or any rosewater on my salad plate, to adapt the martial arts aphorism, if they could see on my face what I feel in my heart, nobody would ever do that twice. 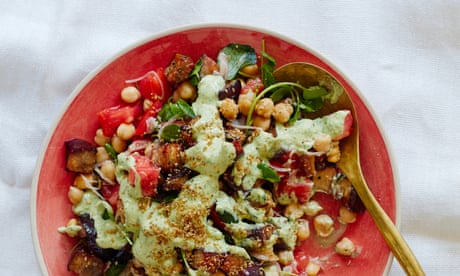 To return to those traditionalists: what if you want just leaves, some wholesome, winsome leaves, on their own, with no mucking about? I’d countenance most leaves except frisée chicory, which is bitter and looks like a librarian who hasn’t brushed their hair. Oh, sorry, and iceberg lettuce, which I’m nothing like as snobby about as most of the world, but it has to be served quartered and smothered in blue cheese dressing – that’s not a salad, it’s more of a fun gimmick.

Otherwise, take some leaves – my all-time favourite is the butter lettuce, floppy and a bit nostalgic, the kind of thing Peter Rabbit would steal – and dress them in oil and vinegar mixed with salt and garlic that have been pounded in a 1:1 ratio. Perplexingly, this will feel like too much salt and too much garlic. It is an incredibly poky and moreish salad, which is delicious against anything – bread, ham, cheese, other vegetables, genuinely anything and sometimes makes people cough, but I don’t mind that.