At 1.10pm on Thursday, Khadijah Mellah, an 18-year-old from Peckham, became the first jockey to ride in a race in Britain wearing a hijab. Just over a minute later, she made history again by riding the winner, as her mount Haverland got the better of a tight finish to win the Magnolia Cup at Goodwood, a charity event in support of Wellbeing Of Women. 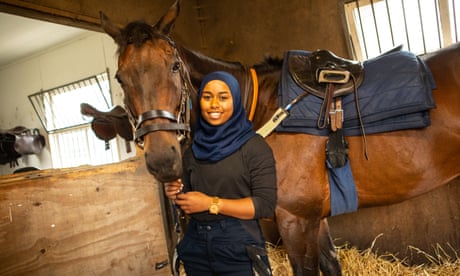 From Brixton horse club to Glorious Goodwood for pioneering student

The unlikely story of Mellah’s journey from the Ebony Horse Club in Brixton to one of the world’s most famous racecourses had attracted plenty of media attention in recent weeks, but nothing to compare with the scrum as she returned to the winner’s enclosure, amid a level of acclaim that racegoers usually reserve for Frankie Dettori. Dozens of family members and friends were also at the course to welcome her back.

Mellah was the youngest jockey in Thursday’s 12-strong field, and up against several opponents who had learned to ride almost as soon as they could walk. Mellah, by contrast, did not sit on a horse until her early teens, after her mother noticed an advertisement for the Ebony Horse Club, which aims to “transform young lives through horses in south London’s most disadvantaged communities”.

Oli Bell, a presenter with ITV Racing as well as a patron of Ebony Horse Club, arranged for one of its riders to take part in the Magnolia Cup, against celebrities including the former Olympic gold-medal winning cyclist Victorian Pendleton and Vogue Williams, an Irish reality TV star and model.

In an interview with the Guardian last month, Mellah explained that she first discovered the Ebony Horse Club when her mother saw a leaflet at a local mosque. “She said ‘there’s a riding club in Brixton’. I was like, yeah, Mum, sure. Absolutely no way. Oh my God, there is!”

Mellah’s victory followed two months of intensive training at the British Racing School in Newmarket, and dozens of early starts at the nearby stable of Charlie Fellowes, Haverland’s trainer. Hayley Turner, British racing’s most successful female jockey with a string of big-race wins to her name, also provided her with expert coaching.

“I’m just so glad that everyone’s here to support me,” Mellah said. “Haverland is such an amazing horse and I love him so much.

“When we were going round in circles [before the start] I was trying to get everyone to start talking as it was dead silent. Everyone was on the ball at the start, then we set off and there were three horses in a line in front of me like a brick wall. The kickback was flying in my face and I didn’t know what to do, so I thought, I’ll pull out and see what happens.

What happened was that Haverland quickened towards the leaders before edging in front a few strides from the line.

“When I passed the person next to me, it was like, Oh my God, I can’t believe this is happening, I’m doing it’,” she said, “and then I saw all the family and friends and I just started crying uncontrollably. It’s been amazing.

“Ambitious women can make it. That’s all I want to represent, be ambitious and do it. I’ve had so much support, and I can’t wait to see other stories of other women getting into the industry and doing amazing.”

Mellah is due to begin studying mechanical engineering at university this autumn, but hopes to apply for an amateur jockeys’ licence to extend her career in the saddle.

“I bumped into Frankie Dettori yesterday and he gave me a hug and it was like, ‘Oh my God, this is happening!’,” she said. “It really gave me a lift.

“I’m going to try to go for an amateur [licence]. I want to keep going at it, I’ve loved every second of it. It’s been a whirlwind, a bit crazy. There’s travelling, meeting new people and I love meeting new people, and just getting on with it. There’s been a lot of early mornings and fitness training, but it’s well worth it.

“Even in my wildest dreams I never imagined this could happen. I only sat on a racehorse a couple of months ago and I am just never going to forget this day. To be honest, I want to go back and do it all over again, what an incredible feeling.”