On a slightly showery first day of Ashes cricket, in between marshalling the humming hover cover and painting the crease lines, the local lads roped in to bolster the Edgbaston groundstaff were able to watch one of their own step up for England.

Back in 2005, when Michael Vaughan’s side were blazing their way back into that summer’s epic series, a young Chris Woakes was among the additional cover-wallahs at the ground, doubtless performing his duties in much the same dependable way he plays his cricket these days. 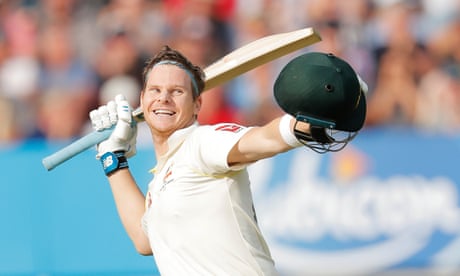 Previously in their shoes, here Woakes was part of a depleted attack charged with filling the more sizeable ones of Jimmy Anderson. The 37-year-old had sent down four overs in the morning, before being bussed off to hospital at lunch for scans on a re-injured calf muscle. With Australia having recovered to 83 for three, a sense of creeping English dread was looming.

And so while Steve Smith’s marvellous lone hand century made it Australia’s day – ensuring Tim Paine’s decision at the toss was not as duff as his Winston Churchill reference 24 hours earlier – that England remain in the contest owes much to the work of Woakes and Stuart Broad in the early afternoon.

The centrality of Edgbaston draws punters from all parts but there is little doubt about the county loyalty of the crowd. This was reflected during the interval when Ian Bell received arguably the loudest cheers of all as six members of the victorious 2005 side were paraded on the outfield.

But the Brummie bellow had gone up a notch further by 2.18pm when another of their own, Woakes, added to his earlier dismissal of Usman Khawaja – caught behind on review to a ball that seamed away – by removing the well-set Travis Head on 35 and Matthew Wade for one in the space of nine balls.

In the case of Head, who had put on 64 precious runs with Smith, it was the ideal right-armer’s set up from over the wicket, firing three across the left-hander’s bows before getting a fourth to nip back in and smash the pads in front.

For Wade, the one-time loudmouth wicketkeeper playing his first Test back as a specialist batsman after barging his way in by weight of runs, it was a similar delivery, albeit one that beat a more whippy and ill-judged shot, with Woakes rightly talking Joe Root into a review on a day to forget for the umpires. 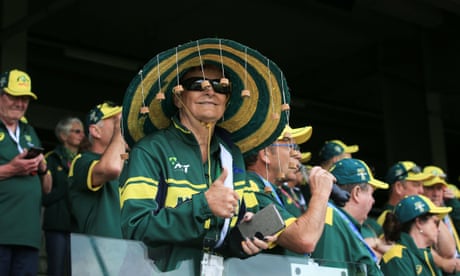 ‘Nothing compares to this’: the Hollies Stand builds its legend

It is fair to say this burst, soon followed up by a double from the resurgent Broad, represented Woakes’s best moment in Ashes cricket to date. His five previous appearances had consisted of his debut in 2013 at the Oval – a respectable outing that got unfairly lumped in with Simon Kerrigan’s more harrowing experience – and four Tests schlepping around Australia.

Bar a four-wicket spell with the pink ball under lights in Adelaide, that 2017-18 tour was a chastening one that, for many, highlighted some limitations overseas. But for England, probably now deprived of Anderson and still hoping Jofra Archer can get Test-ready with Sussex 2nds next week, the home-soil reliability of Woakes is a source of comfort.

So too is a new-found hardiness that saw Woakes send down 21 overs for his three for 58. It may not sound taxing but an angry knee meant his previous toughest day by way of workload in the past year was 12 overs against Leicestershire last September.

England’s World Cup prioritisation is a factor here too, of course. But it’s Ashes time now and Woakes, one of the standouts of that campaign and fresh from six wickets against Ireland, has made a promising start since the quick turnaround.

We need your support to keep delivering quality journalism, to maintain our openness and to protect our precious independence. Every reader contribution, big or small, is so valuable