Nicolas Pépé has completed his move to Arsenal for a club-record fee of €80m (£72m) plus add-ons, signing from Lille on a five-year contract.

The deal for the Ivory Coast international outstrips the £56m Arsenal paid to buy Pierre-Emerick Aubameyang from Borussia Dortmund in January 2018 and makes Pépé the most expensive African player in history. The 24-year-old, who is left-footed but prefers to play on the right side of a front three, scored 22 goals in the French league last season. 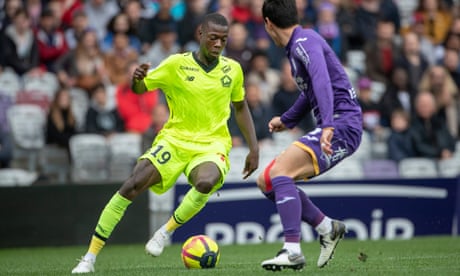 “Nicolas is a highly-rated and talented winger who was wanted by many top teams in Europe,” Arsenal’s head coach, Unai Emery, told the club’s website. “Signing a top-class winger has been one of our key objectives in this transfer window and I’m delighted he’s joining. He will add pace, power and creativity, with the aim of bringing more goals to our team.”

Pépé told Arsenal Media: “Being here is very emotional because it has not been easy for me. I have come a long way and struggled a lot and so signing for this great club is a big reward.”

Asked how he would describe his playing style, he said: “Fast. Quick to connect with the ball and a good finisher as well. That is also an area where I have made progress. I would say that I am quick and a dribbler.”

Pépé is Arsenal’s fourth signing of the summer transfer window after the midfielder Dani Ceballos, who has joined on loan from Real Madrid, and the teenagers William Saliba and Gabriel Martinelli. Saliba has gone straight back to St-Étienne on loan.