Watch: Kartik Aaryan plays the protective beau as he guides Sara Ali Khan through a sea of fans in Lucknow

Facebook
Twitter
Linkedin
Reddit0
Print0
E-mail0
Whatsapp0
Sara Ali Khan and Kartik Aaryan‘s rumoured romance only seems to be heating up with every passing day. The stars, who will be seen next in Imtiaz Ali’s next ‘Aaj Kal‘, have had fans and the media on couple’s watch for the longest time and it looks like they are now ready to go public.
Although both stars have not admitted or denied their relationship status, we have all watched their friendship grow over the past months since Sara got chatty about her crush on the hunk. On Tuesday, the lovebirds were spotted in holding hands in Lucknow, as they reportedly enjoyed some downtime together.

However, their quiet date night of sorts seemed to have been crashed by hoards of fans who rushed to the venue to get a glimpse of the actors. A video doing the rounds, sees Kartik playing the perfect protective beau as he wrapped his arms around Sara and guided her through the sea of fans.

.@TheAaryanKartik and #SaraAliKhan were surrounded by a sea of fans on their outing in Lucknow last night. 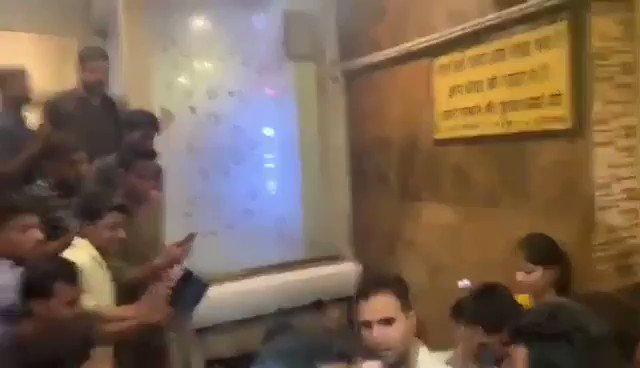 31 people are talking about this

A visibly amused Sara was seen recording the moment on her phone and laughing away as Kartik tried his best to keep the fans at arm’s length.

‘Aaj Kal’, that will bring together the two for the first time on the big screen is said to be a romantic drama that hits theatres on Valentine’s Day 2020.