Insisting that that the Congress-Janata Dal (Secular) coalition in Karnataka will survive the ongoing political crisis in the state, Water Resources Minister DK Shivakumar said HD Kumaraswamy will vacate the chief minister’s position to save the combine.

Speaking to reporters, Shivakumar said that JD(S) patriarch HD Deve Gowda conveyed to the Congress high command that his party is not opposed to a Congress leader becoming the chief minister. “He (Deve Gowda) has said that G Parameshwara, Siddaramaiah or I may become the chief minister,” he said, adding that the decision has been left to the Congress.

However, another senior Congress leader Dinesh Gundu Rao said no such proposal was made. He, nevertheless, accused the BJP of running the Rs 1,000 crore Operation Kamala and poaching the ruling government’s MLAs. “Is this democracy? We will raise and many more issues on the floor (of the state Assembly) tomorrow,” he told CNN-News18.

Dinesh Gundu Rao: This operation Kamala, where did the Rs 1000 crore come from? We have heard tapes of Muralidhar Rao & BS Yeddyurappa speaking to MLAs, offering Rs 20-30 crore. Is this democracy? All this will be questioned tomorrow on the floor of the House. #KarnatakaFloorTest https://twitter.com/ANI/status/1152980584907661313 …

Dinesh Gundu Rao, Congress after Legislature Party meeting in Bengaluru: MLAs are very enthusiastic, we are going with lot of confidence. We will emerge as winners. Tomorrow on the floor of the House we will expose BJP. #KarnatakaFloorTest 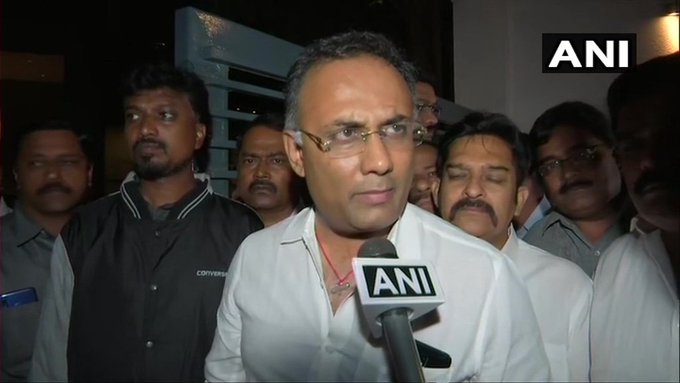 35 people are talking about this

Meanwhile, the lawyer of two independent MLAs from Karnataka R Shankar and H Nagesh said that they will move the Supreme Court seeking a direction for conducting a floor test on or before 5 pm on 22 July in the state Assembly. These two MLAs, along with 16 of the coalition’s lawmakers had submitted their resignations plunging the state into a political turmoil.

However, in a boost for the HD Kumaraswamy-led government, BSP chief Mayawati has directed the lone MLA from the party in Karnataka to vote in favour of the present government in the state.

Two deadlines regarding the trust vote in the Karnataka Assembly have been flouted despite the Supreme Court’s order. This is being seen as the ruling coalition’s attempt to buy time to bring back MLAs who have tendered their resignations.

Karnataka BJP chief BS Yeddyurappa said that Monday will be the Kumaraswamy-led coalition government’s last day. “As Siddaramaiah, Speaker and Kumaraswamy have said that they will seek majority on Monday, I am 100 percent confident that things will reach a conclusion,” he said. So far, only one Congress member Ramalinga Reddy retracted, saying he would support the government.

The ruling combine’s strength is 117 – Congress 78, JD(S) 37, BSP 1, and nominated 1, besides the Speaker. With the support of the two independents, the Opposition BJP has 107 MLAs in the 225-member House, including the nominated MLA and Speaker.