Telangana, India (CNN Business)Indian startup ReNew Power has raised more than $1 billion in funds this year alone for its wind and solar business.

As much as a vote of confidence in ReNew, one of India’s top unicorns, it’s a sign of the country’s shift towards renewable energy.
Including hydropower, India has a renewable power capacity of 118 GW, the fifth-highest in the world. The government wants that to hit 500 GW by 2030.
ReNew is the biggest independent renewable energy producer in the country, generating about 5 GW, with another 3 GW of new projects built.
Content by BP
The Dual Challenge: What is the World’s Greatest Challenge?
Across India, as millions lift out of poverty, the challenge is provide more energy with fewer emissions.
It has more than 100 wind and solar plants, generating about 1% of all India’s electricity. It also has a rooftop solar business that operates in about 20 states. I 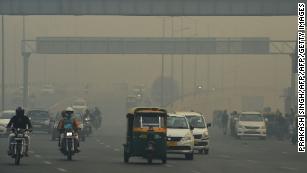 Can India kick its coal addiction?
“We are at the beginning of a fairly significant energy transition,” said ReNew Chairman Sumant Sinha, who founded the company eight years ago.
“Historically, India’s energy has been based on coal, primarily for generating electricity,” he told CNN Business. “But now renewables have become so much cheaper, about 30 or 40% cheaper than coal, that going forward a large part of the demand is going to be met through renewable energy sources.”
India now produces the world’s cheapest solar power, according to an International Renewable Energy Agency survey. Half of the world’s 10 largest solar parks under construction were in India, according to a report published last year.
Sinha credits the government of Narendra Modi with promoting a transition towards renewables.
“When Mr. Modi became prime minister in 2014, we had about 20,000 megawatts of both wind and solar installed,” said Sinha. “At that point, he set a target of getting, by the end of 2022, almost 175,000 megawatts of wind and solar installed … and that is actually quite remarkable.” 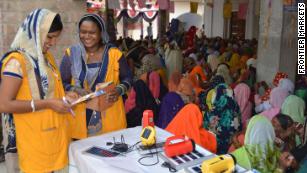 Women are bringing solar energy to thousands of Indian villages
Earlier this year, after ditching plans for an IPO, ReNew received $350 million in debt from the Overseas Private Investment Corp — the US government’s development finance institution — and $375 million by issuing green bonds.
Other Indian companies benefiting from interest in clean energy include Greenko Energy Holdings. In June, sovereign wealth funds Abu Dhabi Investment Authority and GIC Holdings Pte Ltd agreed to invest $495 million in the Hyderabad-based company.
But there are challenges in trying to meet such ambitious renewables targets.
Last year, the Indian government introduced a two-year 25% tariff on solar panels imported from China and Malaysia. The idea was to promote domestic manufacturing, but some fear it will make solar power more expensive.
Despite the progress, Sinha believes India will be hard pressed to produce the targeted 500 GW of renewable energy by 2030. And he says the country is a long way from giving up on coal.
India’s demand for energy is forecast to more than double by 2040, according to the International Energy Agency, and Sinha concedes that means coal will continue to play a key role in the energy mix.
“Irrespective of how rapidly we set up new solar plants, you will always have a gap in which you will need coal to play a bigger role,” he said.
Source: CNN
Facebook
Twitter
Linkedin
Reddit0
Print0
E-mail0
Whatsapp0