India delays mission to land a rover on the moon

(CNN)India’s mission to land a rover on the surface of the moon was called off due to a “technical snag” less than an hour before take off Monday.

The lunar mission, called Chandrayaan-2, which means “moon vehicle” in Sanskrit, would have been a first for the country that is attempting to become a space superpower.
Only three countries, the United States, the former Soviet Union and China, have made a soft-landing on the moon’s surface.
But just 56 minutes before the scheduled liftoff from the Satish Dhawan Space Center at Sriharikota in Andhra Pradesh state, the Indian Space Research Organization (ISRO) called offthe mission “as a measure of abundant precaution.”
A revised launch date will be announced later, the agency added.
The mission had been heralded as a significant step for India, as it attempts to realize its space ambitions. In the past 10 years, the Indian space agency has launched multiple missions into space to gain a better understanding of Mars and the moon.
The country aims to turn itself into a global space power and put Indian astronauts into space by 2022.
The aborted mission comes almost 50 years to the day that Apollo 11 launched its historic feat to put the first human on the moon. 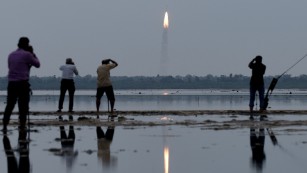 India in record satellite launch as Asia’s space race heats up
Chandrayaan-2, which weighs 3.8 tons and carries 13 payloads, was due to take about two months to reach the moon, where it was to position itself in a circular orbit 62 miles (100 kilometers) above its surface.
The mission had three elements — lunar orbiter, lander and rover, all developed by the Indian Space Research Organization (ISRO). Once in orbit, the lander — named Vikram after the pioneer of the Indian space program Vikram Sarabhai — was to separate from the orbiter and gently land on the moon’s surface near its South Pole around September 6.
A robotic rover named Pragyan (wisdom) was then expected to deploy and spend one lunar day, or 14 Earth days,collectingmineral and chemicalsamples to examine the composition of the moon’s surface. Over the next year, the orbiter would map the lunar surface and study the outer atmosphere of the moon.
As well as coinciding with the 50th anniversary of the Apollo moon landing, the aborted launch comes as other space agencies revisit the idea of sending humans to the moon and beyond.
NASA has touted a bold plan to return American astronauts to the moon by 2024, China is busy building its own space station, and Russia recently announced plans to send tourists into spacein the next two years.
Source: CNN
Facebook
Twitter
Linkedin
Reddit0
Print0
E-mail0
Whatsapp0