(CNN)A four-storey building has collapsed in the major Indian city of Mumbai, leaving up to 50 people trapped inside.

The building collapsed in the Dongri neighborhood on Tuesday afternoon, said Tanaji Kamble, a spokesman for Mumbai’s civic authority.
Local and federal agencies have been mobilized for search and rescue efforts, including Mumbai police and firefighters, and three teams from the National Disaster Response Force. 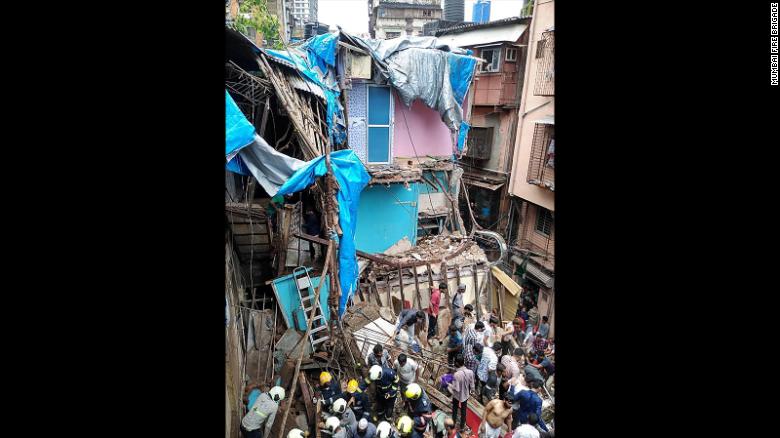 The building collapsed in the Dongri neighborhood of Mumbai.
Adjacent buildings are also in dangerous conditions, and residents inside are being evacuated, said Mumbai fire brigade chief Prabhat Rahangale.
Images and videos on social media show the street covered with rubble, with rescue workers and volunteers clearing the debris.
The cause of the collapse is not yet clear, officials say.
The collapse comes just weeks after Mumbai faced devastating floods that left 43 dead. Heavy, sudden monsoon rains pummeled the state of Maharashtra, washing away houses and flooding transport hubs.
In Mumbai, officials have declared the storm to be the worst the city has experienced in over a decade.
The floods have since receded in the city, and rains are light on Tuesday — but further north, the states of Assam and Bihar are battling floods and landslides, with over 6.7 million people directly affected. Homes have been destroyed, and hundreds of thousands of people have evacuated to temporary shelters.
Source: CNN
Facebook
Twitter
Linkedin
Reddit0
Print0
E-mail0
Whatsapp0