The 10 rebel MLAs camping in Mumbai since Saturday have approached the police seeking security as they fear that Karnataka Chief Minister H D Kumaraswamy and Congress troubleshooter leader D K Shivakumar will “storm” into the premises and threaten them when they reach Mumbai Wednesday.

In a letter addressed to the Mumbai Police Commissioner, the 10 MLAs have said that they don’t want to meet their state leaders who are on their way to Mumbai. “Kind request to help us in this matter and do not allow them to enter the hotel premises,” the letter read. Tight security cover — State Reserve Police and Riot Control Units — has been deployed around the hotel after the lawmakers’ letter.

While there no information on if Kumaraswamy will also visit Mumbai, Congress leader and Water Resources Minister D K Shivakumar arrived in the city Wednesday morning to meet dissident legislators. He is accompanied by JD(S) MLA Shivalinge Gowda. Undeterred by the tight security, Shivakumar said they have come to meet their “friends and party men.” “Let Mumbai Police or any other force be deployed. Let them do their duty. We’ve come to meet our friends. We were born together in politics, we will die together in politics. They are our party men. We have come to meet them,” he told news agency ANI.

The signatories of the letter are Shivram Hebbar, Pratap Gowda Patil, B C Patil, Byrati Basavraj, S T Somshekar, Ramesh Jarkiholi, Gopalaiyya, H Vishwanath, Narayan Gowda and Mahesh kumutali. The copies of the letter have been marked to Zone 10 deputy commissioner of police, senior inspector of Powai police station and the management of the hotel they are staying in. 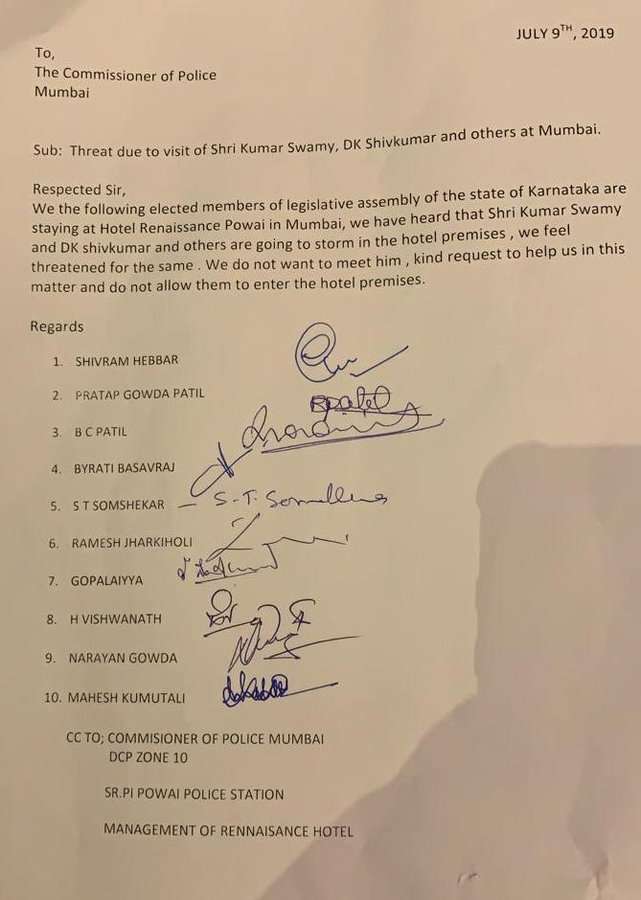 Meanwhile, in a breather to the Congress-JDS alliance, Karnataka Speaker K R Ramesh Kumar Tuesday rejected the resignations of nine of 14 coalition MLAs on the ground that they were not tendered in the correct format. The Speaker s decision gives the Congress-JD(S) combine breathing room to pull the government back from the brink of collapse.

Since Saturday, Karnataka has been thrown into a political crisis with 14 MLAs resigning from their positions. If the resignations were accepted by the Speaker, the alliance would have been reduced to a minority of 103 in the 224-member House, after two Independent MLAs, too, withdrew support and tendered resignations Monday.