India vs New Zealand: All you need to know about reserve day for semi-final clash

India vs New Zealand semifinal match at Old Trafford, Manchester was called off on Tuesday after rain interrupted play with only 3.5 overs left in New Zealand’s first innings. New Zealand were batting on 211/5 at that stage and with no further play possible, the remainder of the match was deferred to Wednesday. 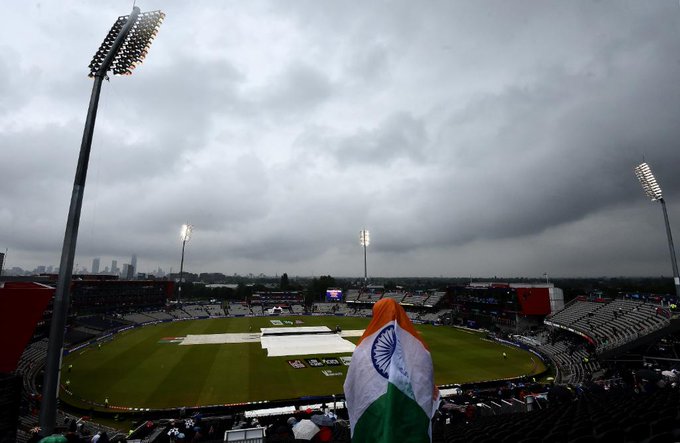 With the rain unrelenting, play has been called off for the day. New Zealand will resume their innings tomorrow at 10.30am on 211/5 with 3.5 overs to bat.

1,622 people are talking about this

Rain arrived over Old Trafford at 2 PM local time and went on relentlessly throughout the afternoon. The covers came off for a short period of time at 5.30 pm, but after officials inspected the pitch play was called off for the day around an hour later.

After Martin Guptill (1) was dismissed by Jasprit Bumrah on the fourth over, captain Kane Williamson (67) took charge of his team and guided New Zealand over the 100-run mark, while Ravindra Jadeja had sent his partner Henry Nicholls back to the gallery. After Williamson was dismissed by Yuzvendra Chahal, veteran batsman Ross Taylor (67*) showed resilience to hang on to guide the Kiwis to a respectable total.

Stuck at 211/5 after 46.1 overs, New Zealand have a chance on Wednesday to increase their total even further, but the weather forecast for Wednesday is worse than Tuesday, so there’s still a heavy chance that the match might not even happen, or if it does, might happen in limited overs.

What are the DLS calculations?

If it continues to pour on Wednesday, India could have to chase a revised target courtesy of Duckworth Lewis Stern (DLS) method, which would be 237 for 46 overs. If it’s reduced to just 20 overs, the Men in Blue would have to chase a challenging 148.

2,934 people are talking about this

What is Reserve Day?

The reserve day has been kept by ICC because of scenarios like this, where a knockout match cannot be completed on the same day. The play will continue from where it was left off, and would not be a restart, using the same start time and hours of play as the scheduled match day.

The reserve day is only put to use when it is impossible to reduce the number of overs down to the minimum 20 overs per team, or by extending the match up to 120 minutes because of weather conditions.

The reserve days are: July 10, for India vs New Zealand at Old Trafford; July 12 for England vs Australia at Edgbaston; July 15 for WinnerSF1 vs Winner SF2 at Lord’s.

If no play on Reserve Day?

Incidentally, India’s league match against the Black Caps was also washed out in Nottingham. If a repeat of that happens on Wednesday, then New Zealand would crash out of the semi-final and India would progress to the final, because of having a better league position on the points table.