London-Nairobi Flight Horror: Man ‘Falls Off to Death’ From Kenya Airways Flight’s Landing Gear; Identity Yet to be Ascertained

London, July 2: In a horrific demise, a man fall to death from a Heathrow Airport-bound flight of Kenya Airways. The deceased, whose identity is yet to be ascertained, was a stowaway who illegally got into the plane’s landing gear. As the flight from Nairobi neared London, the man ended up falling mid-air. An inquiry has been launched into the incident.

The body was recovered at 3:39pm (local time) on Sunday, from a private garden in Clapham. The owner called the police immediately, and the body was sent for post-mortem. 10 Years After Blast, British Airways Resumes Flights to Pakistan

Efforts are underway to ascertain the identity of the deceased. The Kenyan Ambassador in London has been informed and asked to assist in identifying the person. 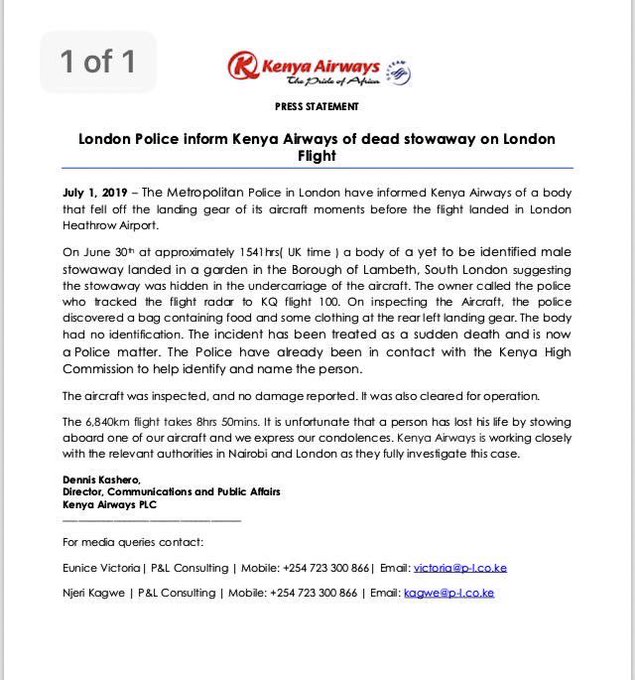 Heartbreaking stuff.
Kenya Airways say a man has died after hiding in the undercarriage of an aircraft travelling from Nairobi to London.
The gentleman has not been identified yet.

The flight, from whose landing gear the man fall to death, has been identified as KQ 100. The Kenya Airways said the plane is dedicated for the 6,840-km journey between Nairobi and London. The flight takes 8 hours, 50 minutes to reach Heathrow Airport after take-off.

The carrier has expressed sorrow over the incident, and has assured to assist the authorities in London and Nairobi who are probing the death of stowaway. Action is also expected to be taken against the ground staff and crew members who failed to apprehend the stowaway.